The Path Not Taken

I was on a writers retreat from May 24 to 27. On a Sunday afternoon during the retreat, I sat down and did some free writing. I never share this type of writing, but this time, I’m making an exception. This is me, the unedited version.

I’m sad but at the same time, happy. I’m having an amazing weekend here in St. Margaret’s, just past Monticello, in a beautiful seaside chalet at the eastern end of P.E.I. So why the sadness?

It’s that time during a vacation when my body realizes that it can start to slow down. I’m not working, rushing, doing or falling behind. It’s then I start wondering why I work, rush, do and fall behind. Modern life.

I don’t think it’s fair that because we have to work to support ourselves that there’s an almost automatic assumption we should kill ourselves in the process. Too many are doing that.

In fact, I told Raymond, then Kathleen and Lucy [my retreat partners], that I didn’t have a summer last year. I worked all the time. I didn’t once go to the beach for a walk. I never once went for a trail walk. Raymond and I did very little Sunday driving. I like Sunday drives with Raymond. Driving his convertible makes him happy, and I get the benefit of a late lunch or early supper at a restaurant where we normally wouldn’t eat. Win-win.

So back to feeling sad. I guess I’m sad because I feel like I didn’t take my life in the right direction. I had this epiphany while sitting in the tub, a deep white one filled with warm water, salt crystals and rose petals.

I told Kathleen and Lucy that as I sat there relaxing, my mind at ease, I realized that what I had really wanted was to be a homemaker and writer. I wanted to excel in the domestic arts: cooking, baking, cleaning, gardening, sewing, and other kinds of handiwork. I wanted to write about these things and about life.

There was a woman in the UK, Jane Brocket, who had a blog about home life, domesticity, quilting, baking, sewing, tulips, books, film, art and literature. I loved her blog. She took all the pictures herself and they were beautiful.

I looked forward to her posts and was living my dream through her blog even though I didn’t realize it. Then Jane announced she was shutting it down. I forget the reason why she did but I was disappointed. She disappeared and I never found anyone else quite like her.

So back to feeling sad. I never thought I could make a living in the domestic arts. Plus, when I was a certain age, there was societal pressure to get a formal education and have a career. After all, my predecessors fought for that right.

I suppose I didn’t think much about what I was doing at the time. The logical step for someone who excelled academically was to go to university and find a job. I wish I’d spent more time searching out women who still practiced the domestic arts to learn from them, educate myself, and also work on developing my skills as a writer. 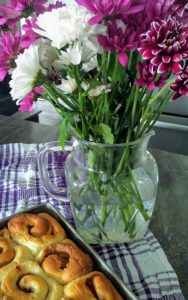 Right now, I tell people that my blog’s theme revolves around holistic health and spirituality. In reality, I write about whatever I want. But since my bathtub revelation, I think I’ll turn my attention more to the domestic arts. Now and then I might write a blog post about that. Imagine, pictures of cinnamon rolls sitting on tea towels accompanied by a lovely written reflection. I dare say that would be boring for some, but it’s exciting for me.

Right now, I have a busy job and nine more years before retirement. Actually, closer to eight. But in that amount of time, I could make great strides in my writing. I could cook and bake more because I already know how to do that. I could even think about learning some sort of handiwork that I’ve never tried before, like crochet or embroidery.

The thought of this excites me. In fact, by the time I retire, I could be pretty good at something. Maybe I could even start a second blog à la Jane Brocket.

Maybe my second act will be all about doing the things I turned my back on so many years ago when I allowed another sort of life to get in the way. I could return to my roots, my creative center, and bask in the healing power of doing what I really want.

Even as I write this, I feel my heart expanding and a warmth spreading through my stomach. Funny, I don’t feel so sad anymore.

Why We Don’t Tell the Truth